Transbay may not be the only blended station in the Peninsula corridor that would benefit from a more efficient and effective use of space, according to Eric Eidlin of the Federal Transit Administration, at a recent presentation at theÂ 2014 Rail~Volution conferenceÂ covering research on European High Speed Rail systems supported by the German Marshall Fund (GMF). Based on his research, which will also be published soon in report form, Eidlin concludes that not only is it feasible to create compact, combined stations, but these stations can become popular destinations that generate economic value for host cities and agencies.

Caltrain and High Speed Rail have recently been working together to identify rail car designs that will provide the greatest level of combined rail service into the space-constrained Transbay terminal by enabling interoperable platforms.

This represents a change from an earlier design for Transbay and other California High Speed Rail stations that hadÂ dedicated platforms separated from local and other regional service. Â Eidlin’s research shows how other parts of the world are able to create integrated platforms, providing faster and more efficient passenger transfers among long-distance, regional, and local transit. Â The possibility of quick and easy connections, as well as the possibility of creating high-speed rail stations that are destinations within urban neighborhoods, are competitive advantages for high speed rail compared to air travel, but only if these advantages are recognized and stations are designed to make the most of them.

In his Rail~Volution presentation, Eidlin reports that â€œthe experience of French and German stations suggests that it is possible to accommodate high speed trains at conventional rail platforms.â€ Â Â Â â€œThe image below of Berlinâ€™s Main Station, which was completed in 2006, clearly demonstrates the close integration of rail modes, showing three distinct rail services running parallel in the same corridor and arriving at the same station with shared platforms. 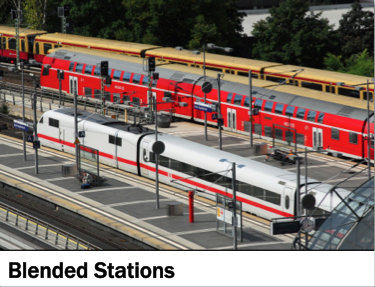 European stations have compatible platforms that are able to accommodate more rail service and a greater variety of modes than is currently contemplated for California High Speed Rail. Â Lyon Part-Dieu, the most important rail station in France for train connections, â€œaccommodates hundreds of high speed, regional, and conventional trains in just one single-level rail yard with eleven parallel platforms tracks.â€ Â Â The Lyon station supports more than twice the number of trains that are expected to connect San Francisco and Los Angeles in 2029, the estimated opening year of HSR operations between the two cities.

Based on these examples, Eidlin recommends that the High Speed Rail Authority work with Caltrain and other regional services to consider opportunities for greater integration at San Jose Diridon, Millbrae, and Los Angeles Union Station. Â Unfortunately, the HSR platform configurations that have been publicly released for Diridon Station and LA Union Station all show HSR platforms separate from conventional tracks. Â These designs, however, were created before â€œblended systemâ€ concepts were introduced in the 2012 business plan, whereby High Speed Rail shares infrastructure with regional rail services, a plan with a lower price tag that helped garner legislative approval. Â Â Â The good news is that Eidlin reports that the California High Speed Rail Authority is now willing to explore opportunities for more integrated station design, according to Michelle Boehm, Southern California Regional Director for CAHSRA. 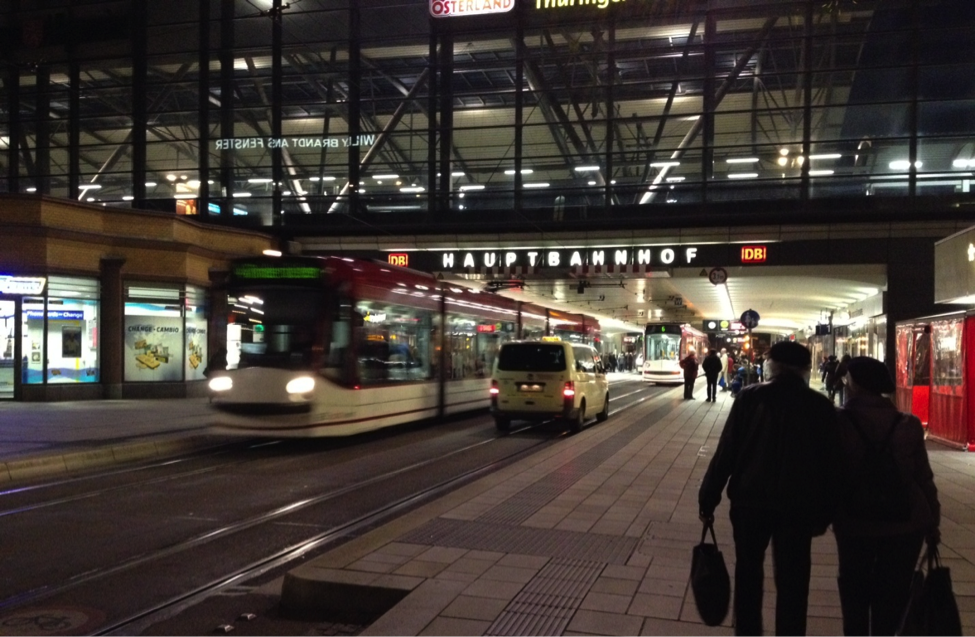 Seamless transfer between streetcar (below) and intercity rail (above) in Erfurt. Â Photo: Eric Eidlin.

Eidlin describes the integration with local transit at Erfurt, Germany: â€œ…at Erfurt Main Station, streetcarsâ€”the dominant mode of public transit in Erfurtâ€”run directly underneath and perpendicular to the rail platforms. Â Streetcar passengers step off the streetcar onto the sidewalk and go up one level to the rail platforms via escalators. Â This transfer takes about 30 seconds. Â The directness of this connection makes streetcars a convenient means of getting to the station. Â The entire streetcar system also runs on ten-minute headways or better, so passengers never need to wait very long for their streetcar.â€

Eidlin notes that Â from an economic development perspective, smaller footprints for rail yards, platforms, and other track infrastructure may also allow for greater private-sector development opportunities in and around the station. Â In Europe, High Speed stations, like the station shown below in Leipzig, are often destination malls. Â Destination stations with retail and entertainment attractions can help meet the economic development goals of host cities including San Jose and Millbrae, while potentially providing opportunities to finance some of the transportation infrastructure. 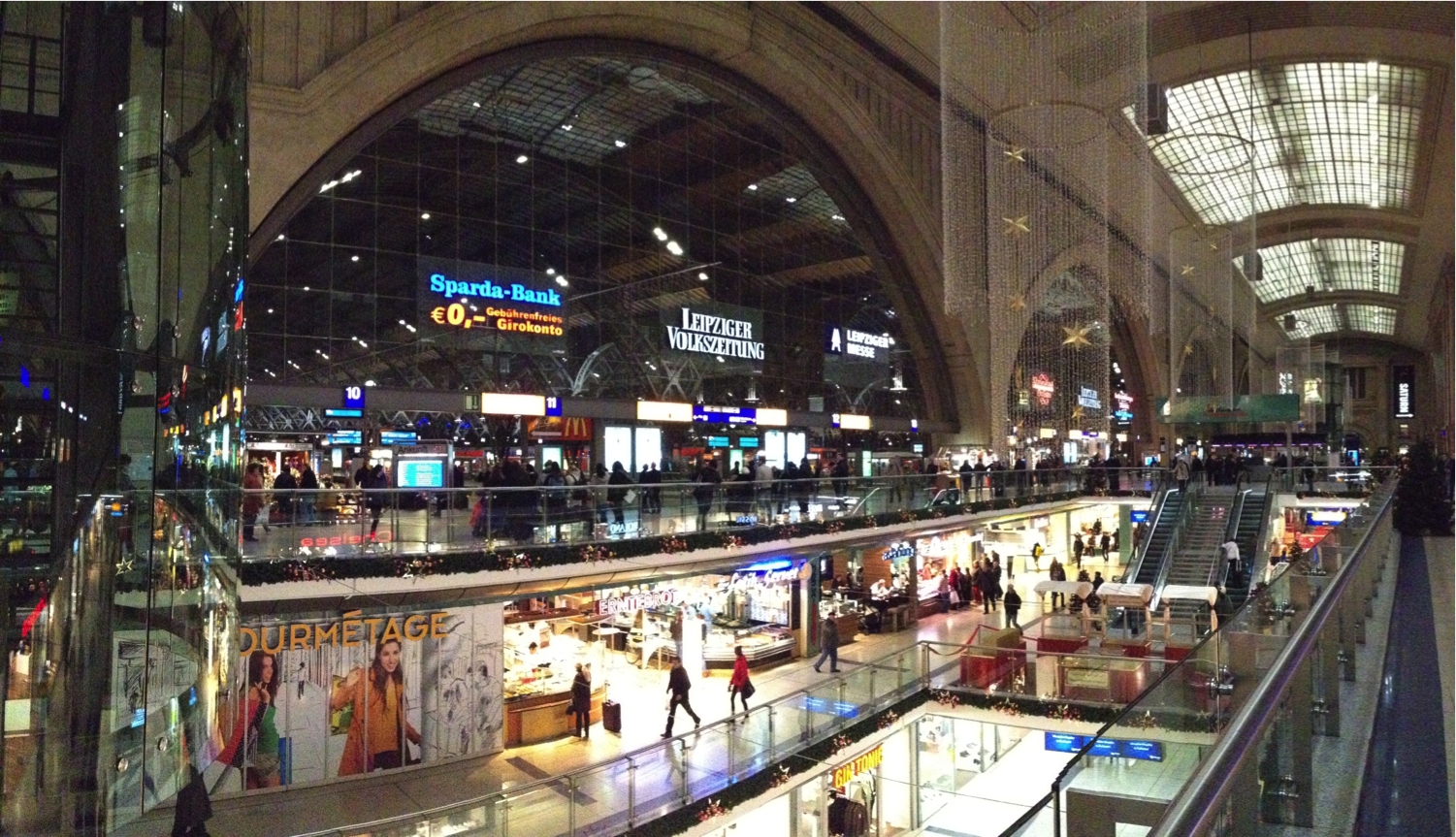 More value from the blended system

Â Once Caltrain and High Speed Rail agreed to create a â€œblended systemâ€ to provide cost-effective, lower impact electric rail service between San Francisco and San Jose with long-distance service to LA, the agencies and the region took on a responsibility to use the shared space more efficiently.

This blending can create opportunities for a better passenger experience with closer connections, lower station construction costs, and better economic development outcomes for cities. Â Achieving the benefits of more compact, blended stations will require the High Speed Rail Authority, along with partner agencies and host cities to re-think the large, less-integrated, more costly stations that were proposed in the first-generation station designs. Â Although building blended stations may be cheaper in monetary terms, it requires challenging coordination among numerous transportation agencies as well as the host city. Â The Bay Area, which is home to 27 separate transit agencies, is not yet been known for excellence in providing integrated transit service. But the prospect of rail stations as destinations fostering local economic development, providing integrated transportation services that maximize ridership and reduce traffic, parking, and greenhouse gas emissions, can motivate everyone to work together, along with the attention of state and federal investors who want to see the best value for the substantial investments.