Caltrain electrification will have significant environmental benefits, according to the Environmental Impact Report (EIR). Â However, electrification might result increases in traffic at specific stations, due to the modestly increased number of trains.

The EIR analysis says that most of the expected intersection delay can be mitigated with signal timing improvements. However, there are a few intersections where the impact can’t be mitigated. These are known hot spots, and the expected delays after electrification will be increasing motivation for the cities to implement grade separation.

Unfortunately, Santa Clara County VTA has some money available for only one of the grade separations, Central and Rengstorff. Fortunately, VTA has said that they would consider grade separations for the next iteration of its longterm strategic plan. Communities on the corridor will need to watch closely and advocate for funding.

Also, some of the proposed mitigations that Caltrain proposes in the EIR are contrary to existing city policies, including widening Sand Hill at El Camino Real and Alma, and (I suspect) widening the intersection at 7th and 16th in San Francisco.

Soon, auto level of service (delay at intersections) will no longer be the metric used to assess CEQA impact for at least some of these issues. Instead, the state is likely to require assessment of vehicle miles travelled. If a project creates vehicle delay but doesnâ€™t increase vehicle miles traveled in a transit area, it will no longer be considered an impact under CEQA. Nevertheless, if gate downtime results in blocking people trying to cross the station, there will be a need for grade separations. The money available for this is the money that we approve as voters.

â€œThe top daily access mode for Caltrain passengers traveling to stations is walking (36 percent). The high mode share for walking indicates that a high volume of passengers live or work within reasonable walking distance of their origin station. Travel by transit or public/private shuttle is the second most popular access mode (26 percent) followed by car (23 percent) and bicycle (14 percent).

The high share of nondriving modes suggests opportunities for Caltrain to work with cities to alleviate parking shortages by more improvements to other modes of station access. While parking is no longer considered a CEQA impact, Caltrain reported on the impact on parking capacity based on community request. The EIR Reports that:

Several stations are close to or beyond full parking capacity. Average daily parking is slightly beyond capacity at Sunnyvale, with more than 100 percent of cars parked in the lot. Parking in excess of 100 percent possibly indicates vehicles parked illegally in the Caltrain lot in restricted areas. Parking at some Baby Bullet stations is very close to full capacity (90 percent or above) at Mountain View, San Jose Diridon, and Tamien Station. Millbrae, Hillsdale, and Palo Alto Station parking lots are all between 75 percent and 90 percent full. At stations with lower ridership, many lots are not full. At stations where parking is at, near, or beyond capacity, passengers who choose to drive tend to look for parking in non-Caltrain lots or on streets near the stations.

While some parking lots are close to full, almost all of these stations already have a majority of customers accessing the station without driving alone (see image below). Caltrain already has an established policy to increase the share of people accessing the station without driving alone. Caltrain describes its policy as encouraging â€œalternative modesâ€ – but today, the â€œalternative modeâ€ to get to the station is driving. There are opportunities for Caltrain to work with cities to futher improve access to the station for modes other than driving. Watch for progress on this after Caltrain finishes up its strategic plan. 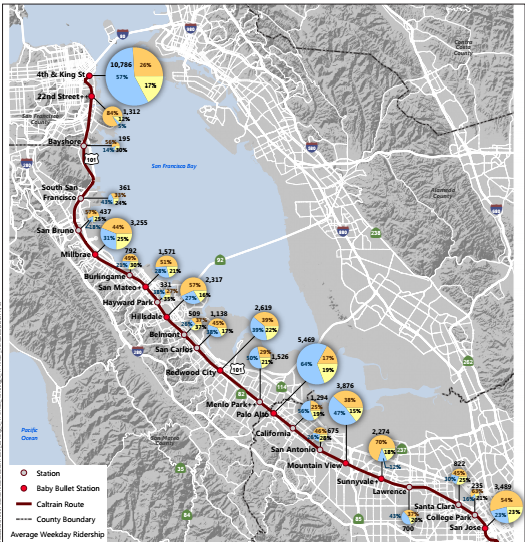 Based on the EIRâ€™s report about Sunnyvale, and anecdotal reports about station areas in cities including Mountain View and Palo Alto, there may be custom of â€œcheatingâ€ in these cities, where vehicles are parking illegally in Caltrain lots, and where Caltrain riders are parking in the neighborhoods. In Palo Alto, this issue will soon be addressed with residential parking permits; Mountain View may have an incentive to go in this direction as well.

The station where parking really does seem to be a problem (though not formally a CEQA impact) is Tamien). Unlike most Caltrain stations, where only a minority of riders get to the station in a car, Tamien station gets 69% of its riders from the parking lot, and another 9% dropped off by car.Â Â A proposed development on land owned by VTA has the potential to make station access even worse. Â The Caltrain electrification EIR is an opportunity to speak up about the need to preserve and improve station access at Tamien.

Data in the EIR shows that Caltrain passengers using a bicycle has increased to an astonishing 14 percent. The new electric rail cars will accommodate bicycles, but the EIR raises concern that not all bikes might be accommodated. Unfortunately, the EIR misses the point about the role of bicycles for Caltrain users.

The EIR states that â€œAny unmet on-board demand for bikes-on-board could be accommodated through the provision of increased bike parking at stations.â€

This statement does not take into account the fact that Caltrain riders bring their bikes on board, not because they are fond of their bicycles, but because a bicycle is the most useful last mile connection. Given land use on the Caltrain corridor, many land uses and other destinations are between half a mile and 3 miles from the Caltrain station – too far to walk.

A bicycle has several advantages, allowing commuters to:

A user who parks her bicycle at her origin station gets none of these benefits. To meet these real first/last mile needs for more users, Caltrain could analyze destinations and commonly used alternative station pairs, and improve bike share access at these locations. The initial rollout of the Bay Area Bike Share system was based on the idea that stations should be located in downtown areas very close to each other, rather than at the destinations that many users need.

While Caltrain is concerned about the space occupied by bicycles, it is important to consider that the alternatives to meet the first/last mile needs arenâ€™t free either. Shuttle connections cost $5-$6, and bikeshare stations also incur costs to install and operate. For Caltrain to reduce capacity demand, it will be important to understand the role of bicycles as a first/last mile solution for riders, and finding alternatives to meet these real needs.

The deadline for public comment is April 29 â€“ send comments to electrification@caltrain.com with the subject line â€œPeninsula Corridor Electrification Project.â€