SamTrans is proposing to make its pilot deep-discount pass program permanent. Â Â SamTrans has been running an R Pass pilot program for residential developments, providing residents with a photo identification card and validation sticker that is used to board the bus. Â The new proposed program would make the pilot permanent, extend it to employers in addition to residences, and add better data collection.

These programs can make a big difference in increasing transit ridership, reducing driving and traffic, and reducing greenhouse gas emissions.Â According to a study conducted by Nelson/Nygaard for the VTA EcoPass program, providing discount transit passes reduced driving by an average of 11%.This puts Â a notable dent in greenhouse gas emissions. Â It also helps relieve traffic congestion, since taking only 5-10% of cars off the road can fix a traffic jam.

So far, there are two clients for the pilot bus pass, both in San Mateo, including Â Peninsula StationÂ an affordable 68-unit family apartment complex on El Camino, and aÂ new 111 unit development on Delaware .

Such programs have strong benefits for housing developers and employers. Â Even if a housing developer pays $30 per month for discounted transit passes- three times as much as the price of a proposed SamTrans pass – over 40 years – the payments are still less than the cost of a space in a parking structure, according to TransForm. 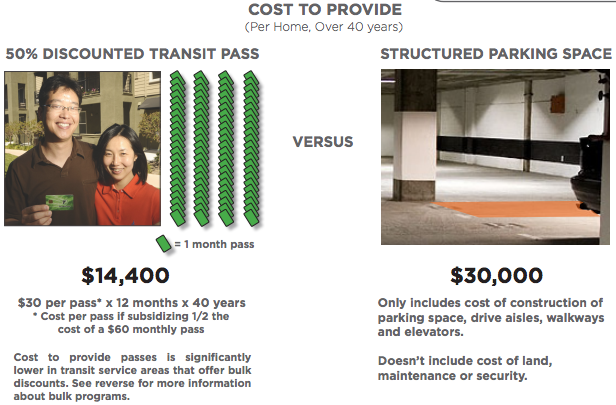 In theÂ proposed new SamTrans program, property managers and employers would pay a set price per eligible resident (five years and older) or employee (working 20+ hours a week.) Â The pass would cost $115 for the 2014 calendar year and $125 for the 2015 calendar year. Minimum participation would be 100 users ($11,500). Â Â The proposal has a higher price and higher minimum than the R Pass pilot, which cost $104 per eligible resident or $5200 per year.

The proposed permanent program would use SamTrans’ new “mag stripe” capability to collect data on the use of the discount pass. Â The pilot did not issue cards with the mag stripe. Â By collecting data, SamTrans will be able to verify the usage rate and analyze the price/performance of the program. This will help SamTrans avoid the problems that VTA ran into, when they discovered many years after the EcoPass program introduction that the program generated much lower revenue than expected, and they lacked good data to be able to redesign the program. Â According to Rita Haskin, SamTrans plans to monitor the financial performance of the program on a regular basis.

SamTrans is using the mag stripe capability instead of Clipper, in part because of the costs to implement new fares on Clipper. Â Cubic’s charges to implement new fares is one of the challenges for the region in getting the Clipper system to reach its potential. Â  Hopefully SamTrans will work with MTC and other agencies with similar needs to negotiate reasonable prices.

If you are interested in providing feedback to SamTrans about this program, there will be a set of public meetings in August. Or, if you can’t attend a meeting, email comments to changes@samtrans.com